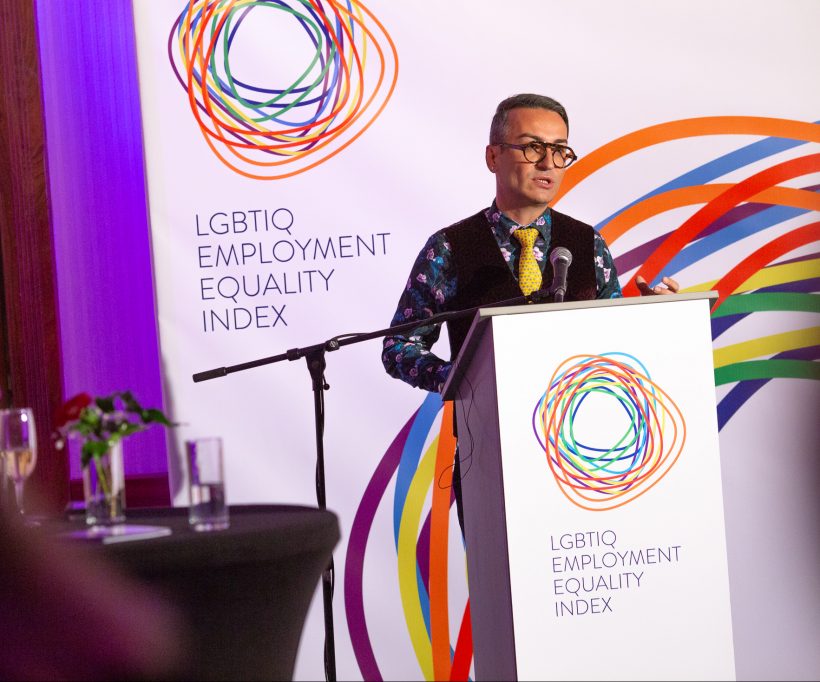 The Headhunter Group, the largest human resource company in Albania and one of the largest in the Balkans, has decided to launch such an Index as part of its commitment to Corporate Social Responsibility and Workplace Diversity

The LGBTIQ Employment Equality Index is a ranking system to determine how well companies respect the rights and dignity of LGBTIQ population in their hiring, training, development and general employment practices. In addition, it rates their compliance with local labor laws on the topic.

The Headhunter Group, the largest human resource company in Albania and one of the largest in the Balkans, has decided to launch such an Index as part of its commitment to Corporate Social Responsibility and Workplace Diversity.

The Group has an intrinsic commitment to see equal employment opportunities extended to all citizens. The Group is also well-placed to create and launch such an Index, as it has the credibility within the private sector to act as a judge of human resource policies.

Each year, on the International Day of Homophobia, Transphobia, and Biphobia (May, 17th), The Headhunter Group presents awards to the companies which have been exemplary in protecting the rights and upholding the dignity of LGBTIQ job-seekers and employees.

The Current Environment in Albania

Albania’s Government is striving and making progress to address the inclusion of women, youth and minorities in all spheres of life. Currently, the Government has set up a number of initiatives in various ministries designed to protect rights and promote social inclusion of marginalised groups.

In March 2010, Albania adopted the law titled “For Protection from Discrimination.” The law protects all Albanians and specifically states that people can not be discriminated because of their gender, age, sexual orientation, religion, political beliefs, ethnicity or any other reason. It bans discrimination in employment – at work, education – at school, or any other public places.

The Commissioner for Protection from Discrimination can hear, investigate and resolve complaints. After reviewing all the information, the Commissioner’s office may seek to resolve the case through mediation. If this cannot be done, the Commissioner’s office will issue a decision containing the appropriate measures and regulations to be taken and set a timetable for their implementation. Cases can also be filed directly with the competent court.

On May 7th, the Albanian Parliament approved the resolution “on the Protection of the Rights and Fundamental Freedoms of LGBT Community”. The Ministry of Labor, Social Affairs, and Equal Opportunities, with support from the Sexual Orientation and Gender Identify (SOGI) Unit of the Council of Europe recently developed the National Action Plan 2015-2020 with significant input from civil society and the LGBT community. The Action Plan will be supported and overseen by a National Implementation Coordinating Group (NICG) to coordinate activities at the local, regional, and grassroots levels. It will be made up of The Focal Points on LGBTI Equality from the relevant Government Departments and representatives from civil society, including CSOs.

About the LGBTIQ Employment Equality Index

The Headhunter Group LGBTIQ Employment Index measures the policies and practices of companies operating in Albania towards LGBTIQ job-seekers and employees.

In this second year of the initiative, Albanian companies showed a great deal of interest in participating in the ranking and the total of 109 companies from multiple industries voluntarily took part in the research. Following a standardized format and methodology, The HeadHunter Group staff conducted on-site interviews and verification of policies and practices.

This event was attended by a large number of ambassadors of the European Union countries, as well as by the Council of Europe, US and UK ambassadors, who gave the prices to the winner companies.

Companies that have received BRONZ awards are:

Companies that have received the certifications are:

Out of 65 participating companies, 3 (three) of them have received awards and 4 (four) other companies received acknowledgment Certificate.

The LGBTIQ Employment Equality Index Award ceremony, organised by The Headhunter and UN Women, was held last night in Sarajevo.

The awards were given out by:

“The Index is prepared by the private sector for the private sector. It assesses the degree to which companies and institutions address discrimination and promote equality within the workplace. As a Workplace Equality Index it is only natural for UN Women to partner with a human resources and recruitment company to support establishing the Index” said UN Women Representative in BiH, David Saunders.

Saunders added: “I have no doubt that next year we will see new companies joining Index, and, most importantly, I trust we will see improved steps by companies to promote genuine equality,and protect the rights, and dignity of LGBTIQ employees and candidates.“

“Although Headhunter Group successfully implemented the Index for several years in the region, this is the first year we are doing it in BiH. We are very satisfied with the support of partners from the international community who recognised the importance of this topic as well as domestic and foreign companies that have agreed to participate this year. It means a lot to us when the UN, the EU delegation or German, British, Japanese and the representatives of other embassies support us publicly. Our goal is to double the number of participating companies next year, and see positive developments in the internal practices of the companies we will be working with next year”, said Elton Ilirjani, CEO of The Headhunter Group.

The LGBTIQ Employment Equality Index is the project of The Headhunter Group, implemented in BiH with the UN Women Office.

The purpose of implementing the Index is to raise awareness of the discrimination LGBTIQ population faces in the workplace, as well as to increase equality, diversity and other positive practices in relation to candidates and employees.

If you are interested in having your company ranked in next year’s LGBTIQ Employment Equality Index or wish to receive information about the Index, please contact: